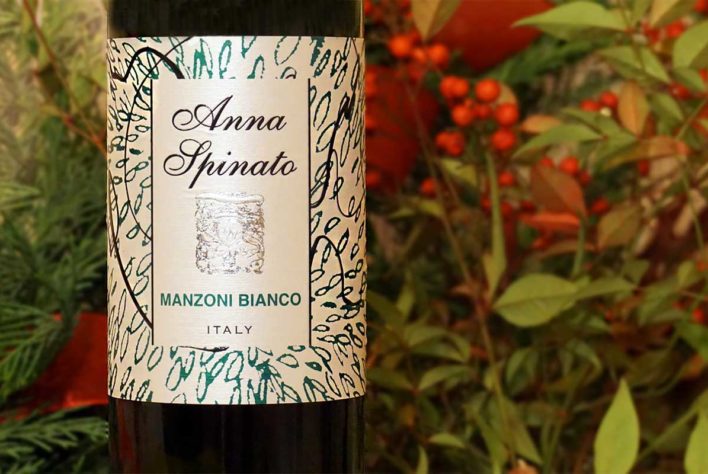 Territory, adaptability and delicacy: these are the main characteristics of the Manzoni Bianco, also called Incrocio Manzoni. An elegant wine, fragrant, easy to love and able to be remembered but, above all, a wine joining tradition and innovation to speak directly to the hearts of those who love white wines that can express themselves with personality. In short, a wine which perfectly represents the character and soul of our winery and occupies a special place in Anna Spinato’s heart!

The history of the “Incroci Manzoni” dates back to 1930 with the experimental crosses by Prof. Manzoni, Dean of the Enological School in Conegliano, who devoted himself deeply to research to identify vines capable of enhancing the qualities of their “parents”. His most famous “creation” is called Manzoni Bianco, was born from the cross between Rhenish Riesling and Pinot Bianco and stands out for its fineness, elegance, body and balance. By now, the Manzoni Bianco is considered a native vine of Treviso province and is loved by the most attentive producers who want to express themselves with a wine rich in character and seek a vine capable of transferring the characteristics of the territory into the glass. Just as Anna Spinato did, who has always believed in the expressive capacity of this vine and has actively participated in its affirmation in worldwide markets.

This is the reason why we saw Anna really excited when she received the highest recognition at the 2nd National Wine Competition dedicated to “Incroci Manzoni”. An understandable emotion: it is not common to receive a gold medal for the wine that makes your heart beat, in Conegliano, among the historic walls of the most famous school of Italian enology, the very one where Prof. Manzoni invented the mythical Manzoni Bianco! We know how much passion and dedication Anna expresses in her work and this award, which arrived in the magical atmosphere of the Enological Institute, has a special value for her: it means entering into the history of Manzoni Bianco and continuing its tale!

Wine trends: the demand for non-alcoholic wines is growing!